The tender for Hesselø OFW has been put on hold

There is a need to analyze the results of the preliminary site investigation further as soft clay formations have been found in the upper 20-30 meters below the seabed.

The tender for Hesselø OFW has been put on hold until the results of the preliminary site investigations have been further analysed. This decision is due to the preliminary site investigations having revealed soft clay formations, especially the upper 20-30 m below the seabed, in large parts of the area selected for the OFW (please see the map below). The results appear to indicate less favourable site conditions than initially specified in the fine screening report, which may cause technical challenges in relation to installation.

Currently, external consultants are conducting further laboratory analyses to fully assess the strength properties of the top soil in the area. These analyses are expected to be concluded in the fall of 2021 after which the DEA intends to initiate a new market dialogue to discuss the consequences of the results with the market players.

Following the results of market dialogue and analyses, all input will be considered and the further tender process will be decided. 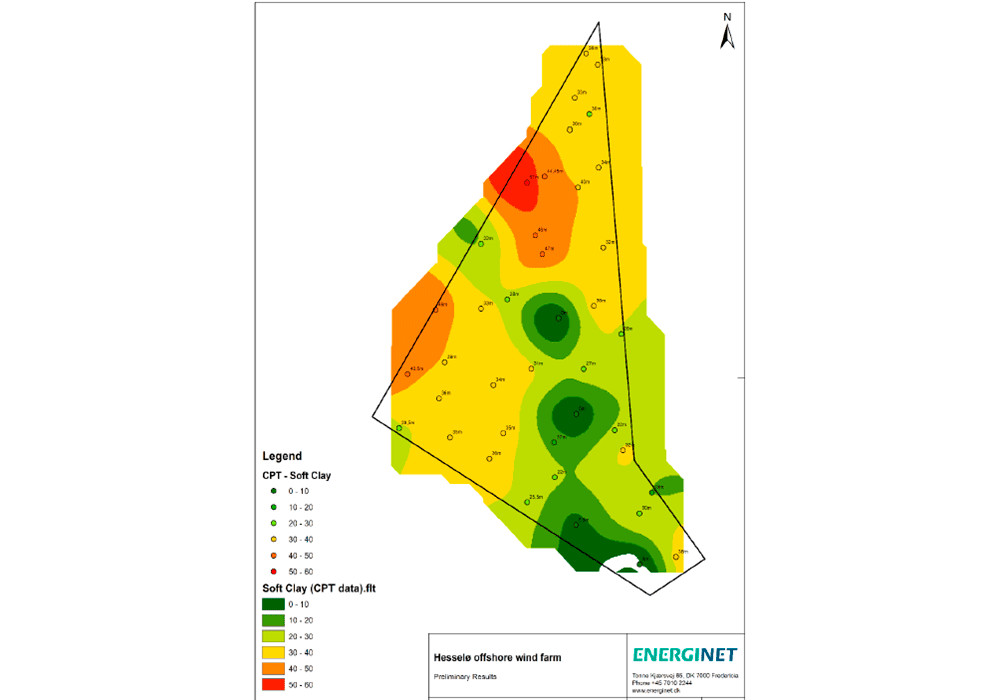 The preliminary site investigations are conducted by the Danish TSO, Energinet. The map illustrates the estimated thickness of the soft clay based on preliminary data from 40 Cone Penetration Tests conducted within the 247km2 area. The coloured map thus represents one of many gridded surfaces that fits the gathered data and the actual clay thickness may therefore deviate from the map illustration.

The Danish wind adventure has been on a path towards net zero subsidies for some years. The agreement on the subsidy scheme for Hesselø Offshore Wind Farm is a step closer to that political objective.

Today, the Danish Energy Agency (DEA) publishes the material for the market dialogue for the upcoming Hesselø Offshore Wind Farm (OWF) tender. The DEA here invites potential tenderers and relevant industry associations to participate to the market dialogue by sending written input and/or by participating in a virtual meeting with the DEA and the Danish TSO, Energinet

Between November 25 and 30, 2020, the Danish Energy Agency and Energinet will host a market dialogue for potential tenderers and the industry on the coming Hesselø Offshore Wind Farm tender.

The Danish Energy Agency (DEA) and Energinet invite potential developers to dive into the seabed-data and to contribute with their assessment of whether Hesselø OWF is still attractive to establish within the current framework set for the project.