Denmark's observed energy consumption increased by 0.2% in 2018, while CO2 emissions increased by 0.3% as a result of higher consumption of fossil fuels. At the same time, a significant decline in North Sea production last year has led to a fall in total energy production of 10.5% according to the preliminary energy statistics for 2018 published by the Danish Energy Agency yesterday.

Increase in emissions of CO2

Increased consumption of fossil fuels in 2018 led to a 0.3% increase in observed CO2 emissions from energy consumption compared with 2017. Adjusted for fuel consumption linked to foreign trade in electricity and fluctuations in climate, CO2 emissions rose by 1.3% in 2018. This rise should be seen in light of the fact that 2017 saw a large production of wind energy, and thus low energy-related emissions. When looking at CO2 emissions over the period from 1990 to 2018, observed emissions have fallen by 34.4%, and adjusted emissions have been reduced by 37.5%. 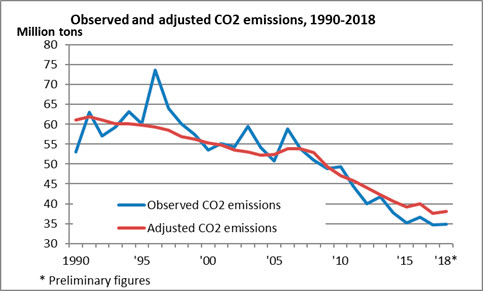 A final statement of Danish emissions of greenhouse gases will be published later by DCE – Danish Centre for Environment and Energy.

Use of renewable energy remains the same

The EU calculates the percentage of renewable energy by taking the final energy consumption as the point of departure. It will not be possible to calculate this percentage until the final energy statistics have been published by the Danish Energy Agency in the autumn. In recent years, the renewable energy share according to the EU calculation method has been around 1-2 percentage points higher than in the national statement based on adjusted gross energy consumption.

Drop in degree of self-sufficiency

The degree of self-sufficiency for energy fell in 2018 from 85% to 76%. This means that total Danish production of energy from oil, natural gas and renewables corresponded to 76% of Denmark's adjusted gross energy consumption in 2018.

Over the period from 2000 to 2018, energy intensity fell by 24.0%. It is currently not possible to calculate energy intensity for individual sectors. These figures will be included in the final energy statistics to be published by the Danish Energy Agency in the autumn.

See the table of facts with the preliminary statements of Danish energy production, energy consumption and CO2 emissions for 2018.

Read more: Link to energy statistics is available at the website of the Danish Energy Agency: www.ens.dk/facts_figures

Energy consumption increased slightly in 2017. This covers a dramatic fall in coal consumption and increasing consumption of renewable energy. Overall, this led to a considerable drop in CO2 emissions last year. These are some of the results in the Energy Statistics 2017, which were published by the Danish Energy Agency today. Publication is in Danish, whereas Excel files are available in English.