Observed energy consumption in Denmark increased by 4.0% to 749 PJ in 2016. The rise is primarily due to a 9.6% drop in production of wind power last year, while net imports of electricity also fell by 14.5%. Furthermore, 2016 was colder than 2015. With adjustments for fuel consumption linked to foreign trade in electricity and climate fluctuations, energy consumption rose by 2.5% in 2016. 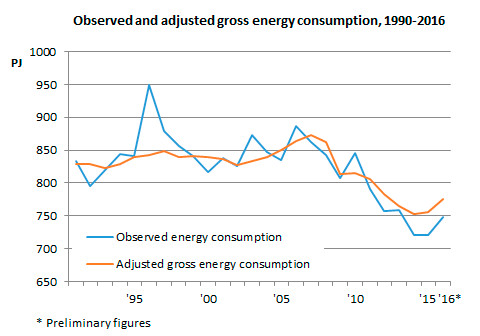 Increase in emissions of CO2

The increased consumption of fossil fuels in 2016 meant that observed emissions of CO2 from energy consumption rose by 5.6% compared with 2015. Adjusted for fuel consumption linked to foreign trade in electricity and climate fluctuations, carbon emissions rose by 2.9% in 2016.

A final statement of Denmark’s emissions of greenhouse gases will be published later by DCE - Danish Centre for Environment and Energy.

Increase in the use of renewables

The EU calculates the percentage of renewable energy differently, taking final energy consumption as the point of departure. It will not be possible to calculate this percentage until the final energy statistics have been published by the Danish Energy Agency in the autumn. In recent years, the renewable energy share, according to the EU calculation method has been around 1-2 percentage points higher than in the national statement based on adjusted gross energy consumption.

The degree of self-sufficiency for energy fell in 2016 from 89% to 83%. This resulted in a total production of energy from oil, natural gas and renewables in Denmark corresponding to 83% of Denmark's adjusted gross energy consumption in 2016.

During the period from 2000 to 2016, intensity fell by 20.1%. It is currently not possible to calculate energy intensity for individual sectors. However, these figures will be included in the final energy statistics, which are to be published by the Danish Energy Agency this autumn.

Energy intensity is a measurement of adjusted gross energy consumption in relation to gross domestic product.

The Danish Energy Agency has recalculated energy indicators for the period 1990 to 2015 based on the revision by Statistics Denmark of figures in the national accounts in November 2016 and Energy Statistics 2015.

See the memo on the recalculated indicators to replace the indicators in Energy Statistics 2015.

See the table of facts with the preliminary statements of Danish energy production, energy consumption and CO2 emissions for 2016.

2015: Denmark hits the lowest energy consumption in more than 40 years

Higher electricity imports and much higher wind power generation led to a large drop in consumption of coal and other fossil fuels at power plants in 2015. This in turn meant that observed CO2 emissions fell by 6.6% in 2015, and that renewable energy now covers 56% of electricity consumption. These are headlines from Energy Statistics 2015, which were published by the Danish Energy Agency today.

Significant increase in the consumption of renewable energy in 2017

Consumption of renewable energy increased by almost 11%, while coal consumption fell by 21% in 2017. Overall, this led to a large drop in energy-related CO2 emissions. This appears by the Danish Energy Agency’s preliminary energy statistics for 2017, which also show that Denmark's degree of self-sufficiency increased last year.