Electricity storage can play a crucial role in Mexico’s fulfilment of its climate goals, according to a new Danish-Mexican study

63 million tons. That is the amount of CO2 emissions that Mexico can cut per year in 2050 if the country achieves an optimal integration of large-scale electricity storage into the energy system. This is the conclusion in a brand new Danish-Mexican study. The reduction is equivalent to almost double the Danish CO2 emissions from energy consumption today. 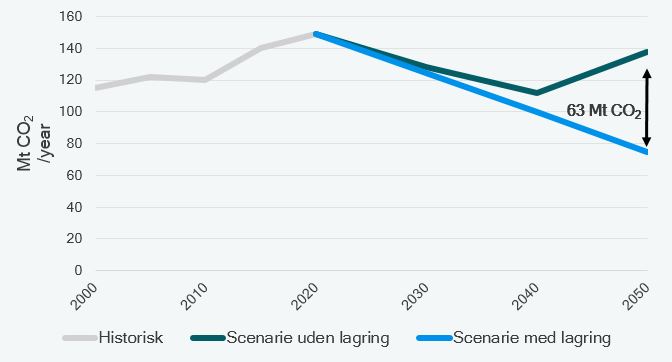 Annual CO2 emissions from electricity production in Mexico in scenarios with and without storage technologies.

It requires innovative thinking and a widespread use of technologies if the objectives of the Paris Agreement are to be met. A new Danish-Mexican study shows how the use of large-scale electricity storage can accelerate the green transition in Mexico. The study shows that efficient use of large-scale electricity storage –for example with lithium-ion batteries – can reduce Mexico's CO2 emissions by 63 million tons by 2050. This is equivalent to 42% of the total CO2 emissions from Mexico's electricity consumption today, which is largely based on natural gas.

In particular, solar energy in combination with li-ion battery systems has the potential to deliver large emission reductions in the sunny country. The potential is estimated at 194 gigawatts in 2050 with storage as opposed to 95 gigawatts without storage. Today, solar energy in Mexico is merely 5.5 gigawatt. The study, which was conducted in cooperation between the Danish Energy Agency and the National Institute for Ecology and Climate Change (INECC), also identifies a number of regulatory barriers that must be removed if Mexico is to reap the full mitigation potential from large-scale electricity storage. This applies, for example, to some electricity market designs which currently disfavor or lack clear definitions for storage technologies.

”Together with the Danish Energy Agency, we have carried out a very successful study that explores the array of benefits from deployment of energy storage systems. We have also identified key barriers and enablers to storage implementation in Mexico. The study showcases how new technologies can help accelerate a cost-efficient green transition and reach the Mexican targets under the Paris Agreement.” says Dr. Claudia Octaviano Villasana, General Coordinator of Climate Change Mitigation at INECC.

The new study stems from a so-called Technology Catalogue, which the Danish Energy Agency and INECC have jointly prepared. Technology Catalogues play a central role in Denmark's green transition, where a large number of data on relevant energy technologies and solutions for a given country are collected and verified through public-private dialogue within the energy sector. This approach has now been shared by the Danish Energy Agency and implemented by INECC in Mexico.

The catalogue goes thoroughly into nine storage technologies with detailed descriptions of economic and technical specifications used in the estimation of the mitigation potential. In particular, Li-ion battery systems are highlighted as the most cost-effective large-scale storage solutions in the long term. The project has helped to bring together the Mexican stakeholders and created a strong anchoring and interest in storage technologies and enhanced the knowledge regarding storage that can support improvement of framework conditions in Mexico.

“The Danish-Mexican energy cooperation has since 2014 focused on the green transition in Mexico. By sharing Danish experiences, the Danish climate effort can be multiplied, as the new study shows. A reduction of 63 million tons is equivalent to almost double of the current annual Danish CO2 emissions from energy consumption,” says Janni Torp Kjærgaard, Deputy Director General of the Danish Energy Agency.

Major technological advances have already been made in storage technologies and the development is expected to continue in the coming decades. This means that the costs of storing energy are gradually reduced over time, which among other things contributes to Mexico having a large future potential for solar energy in combination with, for example, Li-ion batteries. In particular, solar PV will be able to produce large amounts of electricity during the day, which is stored, so that consumption in the evening and at night can be covered effectively with renewable energy despite the sun not shining.

When comparing storage technologies, it can be done by calculating the storage cost per megawatt-hour (MWh) across different technologies. This is also called Levelized Cost of Storage (LCoS). The calculation takes into account the individual characteristics of the technologies, such as lifetime and efficiency at a given storage pattern. Assuming a storage pattern suitable for integration of solar PV, calculations for seven storage technologies are shown below. The calculations have been made with the Danish Energy Agency's LCoS model on the basis of data from the Technology Catalogue, which has been developed in cooperation with the Mexican authorities.'

Calculations of LCoS for seven storage technologies in Mexico when used for integration of solar PV.