2017 was the last year in which Denmark produced more oil than the country consumed. The latest forecast from the Danish Energy Agency shows that from 2018 Denmark is expected to be a net importer of oil. However, Denmark is still expected to remain a net exporter of gas until 2035 - except for a few years where the Tyra facilities are rebuilt.

Since 1993, Denmark has been a net exporter of oil and gas – for many years as the only country in the EU. For oil that position will end in 2018. Except for 2024, the Danish consumption of oil is expected toexceed the amount that we produce in the Danish part of the North Sea. Details can be found in the Danish Energy Agency's updated forecasts for production of oil and gas, which will be published together with an updated assessment of Danish oil and gas resources.

The oil forecast is written down by 8 per cent

The change in the production forecast for oil stems from an overall write-down of expected oil production – totaling an 8% reduction compared to last year's forecast. Furthermore, the start-up date for several fields and discoveries are expected to be postponed and the reconstruction of Tyra facilities will result in a decrease in oil production in 2020 and 2021. As of January 1, 2018 reserves and contingent resources amounted in total to 139 million m3 oil corresponding to 18 years of oil consumption.

Denmark is expected to continue to be a net exporter of gas until 2035, except for the years 2020 and 2021, where a significant decline in gas production is expected due to the planned reconstruction of the Tyra facilities.

As of January 1, 2018, reserves and contingent resources amounted in total to 72 billion Nm3 gas corresponding to 30 years of gas consumption. 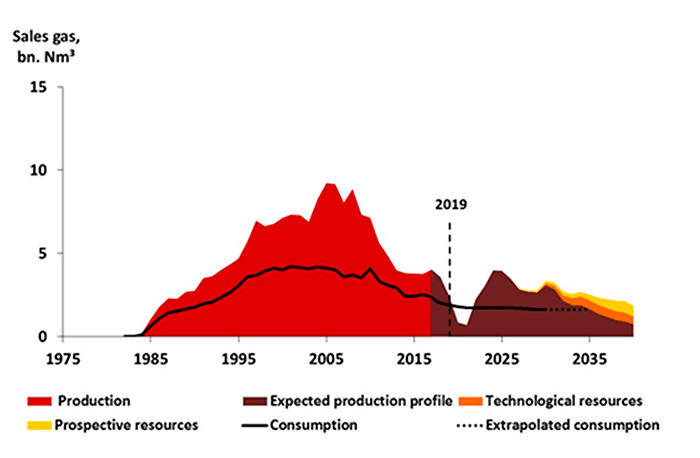 See the publication "Resources and Forecasts, August 2018”at the Danish Energy Agency's website.