A high-level delegation from China’s National Energy Administration and representatives from 16 of the country’s thermal power plants are visiting Denmark from Monday to Wednesday for inspiration on how to optimize the utilisation of the comprehensive Chinese production of wind energy.

More than a fifth of China's wind production in the first half of 2016 was not utilised. The amount equals Denmark's total annual electricity consumption. On this background a delegation from China's National Energy Administration and representatives from 16 selected thermal power plants are visiting Denmark to learn from the Danish experiences on regulating electricity production within CHP plants, as the Danish plants are among the most flexible in the world.

Over the course of the following three days the Danish Energy Agency will share and exchange knowledge about the flexibility of the plants as well as how the Danish electricity market is designed to create incentives for flexibility. The delegation will also meet the Technical University of Denmark (DTU) and visit the Confederation of Danish Industry, Energinet.dk and two state-of-the-art CHP plants.

The cooperation with China is a result of the Danish Minister of Energy, Utilities and Climate, Lars Christian Lilleholt, in January was in China to follow up on the climate agreement from COP21 in Paris. During his visit the Minister signed an agreement on thermal power plant flexibility with the Vice Administrator of China's National Energy Administration, Zheng Shanjie, who subsequently visited Denmark to follow up on the agreement.

The programme covers an estimated annual CO2 reduction potential of up to 40-50 million tons in 2020 in case that China's large unutilised wind production is utilized. This amount is almost equal to Denmark’s present emission of greenhouse gases.

The programme of the delegation visit is as follows:

Read the official programme for the Chinese visit below

Invitation for consultation on a Danish pilot tender for solar PV

The Danish Energy Agency invites comments and questions on the draft tender material for a pilot tender for solar PV installation.

To push forward the appreciation of economic advantages from tangible initiatives of energy efficiency, the Danish Energy Agency is now introducing a model for use in Denmark’s international cooperation on energy and climate. The model enables comparison of costs by reducing energy consumption to the corresponding costs by extending energy supply.

A number of Danish companies participate in a high level conference with politicians and suppliers 29 September 2016, focusing on sharing Danish and Mexican experience on gaining energy efficiency in industry and to show Danish technologies and solutions that can ensure the energy savings are realized. 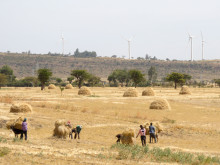 Danish wind expertise to ensure growth and development in Ethiopia 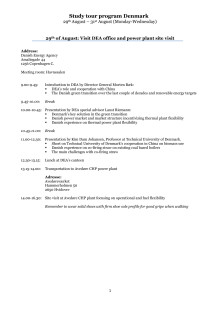